August 16th – Next stop was the cute little town of Lucca. You can get there from Pisa by bus or train. We took the train for ease, but it was pretty cute too. We missed our train at Pisa S.Rossore by a minute, so we wandered the touristy area outside the Field of Miracles, which was the least fun part. I picked up bug spray and an anti-itch treatment — Italian mosquitoes are the worst, particularly the tiger mosquito (Stegomyia albopicta), which you can’t see, hear, or feel. A handful of African street sellers ran from the local Italian policewoman, but returned to hawking watches and sunglasses after she had moved on. We were starving, so we succumbed to the allures of an Indian stall (weirdly called Halal Food, Via Cammeo Carlo Salomone, 14). We ordered two chai masala and split one samosa. They all were surprisingly better than expected, and we should know — Amber has even been to India. The chai were served in thin white plastic cups that needed a double layer, they were so hot we thought the tea would melt the plastic. Satisfied, we then boarded the train to Lucca.

After we walked ages to our ghetto-looking inn (“just” outside the city walls), we dropped off our things, showered, and ate an awesome Italian lunch. Refreshed, we went to the Piazza dell’Anfiteatro expecting to see more remnants of a Roman amphitheatre. But instead it’s just a perfect oval plaza, now completely turned into a charming space, lined with nicely maintained windows and balconies of homes and cafes.

The special thing about Lucca is that it is an entirely walled city, and you can walk/bike around the inside of this raised wall. It’s quite spacious. The wall interior was a cool place to bike (Rick Steves estimated it takes 30 min. total), but my favorite place to bike inside Lucca was along these narrow canals that were very well-paved. Big cobblestones do not make for smooth sailing on a rental bike. We had an hour rental for €3 per bike – well worth it. 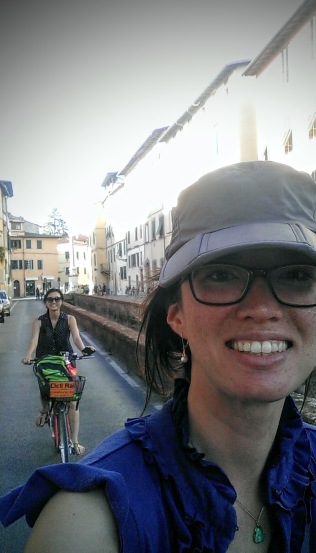 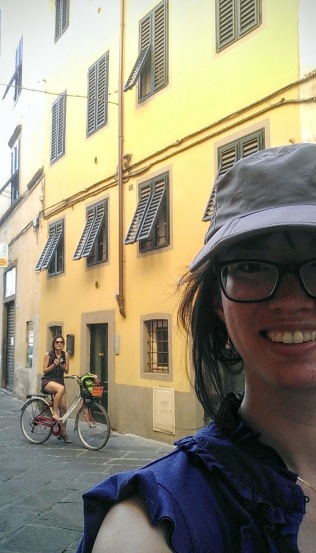 There was also an art exhibit happening around the town — the most moving I found to be “Hoodie” which was done by an American. I took a selfie with it while Amber got a closer look. We had higher expectations from our dinner based on the reviews, but then our waiter recommended the gnocchi (which was good) and his favorite dish, the meatballs (which was more like a dry falafel ball than anything close to the real Italian meatballs I’ve had). After our early dinner though, we were glad to retreat back to our sketch, but clean, apartment.

best lunch: Osteria Baralla (Via Anfiteatro, 5, Lucca LU, Italy). We tried the farro stew noted in Lucca cuisine although it looked like a basic taro-colored bean soup, for our antipasto. Then we had a classic ravioli with bolognese sauce for the primo, the stewed rabbit for the secundo. Naturally we were too full to have dessert! This place was really good though. Highly recommend.

best gelato: Gelateria Momo (Via della Fratta, 11, 55100 Lucca LU, Italy). We needed a sit-down break after biking, and this was pretty nice.

This site uses Akismet to reduce spam. Learn how your comment data is processed.